Hi everyone! I hope you are doing great! I know that as I type this, it is currently snowing in my part of the US! Talk about crazy weather! It looks like spring might not be right around the corner for us

. Marca Reeds sent me a box of ten reeds to review on here. Were they amazing or horrible??? Read on to find out!
First Impressions: Marca Reeds seems to have an imitation Vandoren reed called the Marca Superieuer. According to the site:

The Marca Supérieure reed contributed to re-elected our company, this model maintains a sound very balanced, neither too dark nor too clear, it is a resistant reed which currently is sold to more than one million specimen per annum. Its elegant presentation, out of black box is very appreciated by the musicians.Professionals and students will find a balance thanks to a consistency and a distribution of the wood, which gives to the Marca Supéreure reeds a superb tonality.

When I tested these reeds, I found that they played ok, and didn't sound amazing. Being cheaper than Vandorens, I didn't expect anything more, so for the price, they are worth it.
Cost: $20.99
Pros:
Cons:
Rating: 3/5 stars
These reeds are cheap and are great if you need a backup reed. I would recommend these for beginners who aren't sure if they are serious.

they sent me 12 reeds 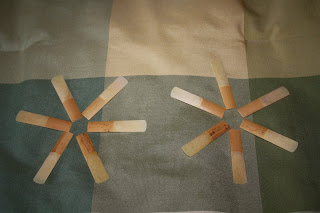 back of the reed 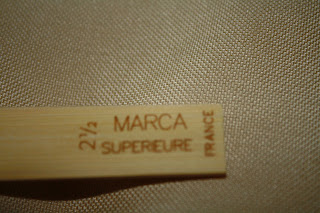 Here is a great article I found courtesy of http://tamingthesaxophone.com/ :
Choosing a reed
Saxophone reeds are quite expensive,and to add insult to injury they are often not consistent unless you go for synthetic reeds. They are made from natural products and most manufacturers seem to fall short when it comes to quality control. To be fair to them, it is not always possible to pick out a bad reed visually, and of course you can’texpect them to be play tested before boxing them up. However it is possible tospot some obvious flaws in a reed, but many shops won’t let you cherry pick the best ones out of a box. Many players have just got used to the sad fact of life that you buy a box of reeds and throw some of them away. If the shop does let you sift though a box, there are several things to watch out for:
Having said this, none of the above is foolproof, there is a slim chance that a reed which fits any of those criteriais still a good blowing reed, but I think those points give you a good rough guide to visual reed selection.
Which Brand?
Which brand you use can be subjective,all of the main brands have their devotees and it’s a good idea to try as many different reeds as you can once you feel confident enough to test them. I useRico Plasticover (these have a plastic coating) as I find they play well straight out of the box, but I also like Alexander Supoerials. These seem to have a higher percentage of good reeds per box, but they are more expensive than other brands. The difference between the main brands is minimal, and I am also happy playing La Voz, Hemke, Vandoren and other types of Rico, not just Plasticovers. I am hoping to do a comparison test and will post the results here soon.
Which Strength?
Many people believe that as youprogress on the saxophone, you "work up" to harder reeds. I think this is a fallacy, possibly born out by a desire to appear macho. Reed strengths are usually measured from grade 1 (very soft) to grade 5 (very hard)in half steps. Very soon after I started, I believed that "real"players used very hard reeds so I used grade 4, but I soon realised that although this made me play very loud and could get altissimo notes quite easily, it was difficult to get a good sound on low notes, and hard to play quietly or achieve a good vibrato or some of the note bending effects I wanted. Since then I have been gradually "working up" to softer reeds. I say working up to softer reeds because, paradoxically, softer reeds can be harder to play loud or high, so a lot of work on diaphragm and saxophone embouchure is needed to achieve the same loudness and high range as with a hard reed. The plus side though is that once you have managed this, your overall dynamic range and flexibility of tone will be greater. Vibrato and note bending will probably be much more flexible and low notes, especially subtone, may be better and easier.
Which strength you end up using can depend a lot on the mouthpiece. As a general rule, mouthpieces with wide tip openings and/or shorter lays(facing curve) often are best with softer reeds, while narrower tip openings or longer facings can have harder reeds. Much will depend on the style of music you play, usually classical players will prefer a narrower tip and a harder reed. My preference is for a wide tip (125 on tenor) and medium soft reeds(2½

. Beginners (especially children) should probably start on a soft reed,e.g. 1½. Most professional players end up using between 2½ and 3½.
Conditioning a reed (aka Preparing or "prepping" a reed)
I find that reeds play best when wet,you can moisten them in your mouth for a while or soak them in a glass of water(some people recommend alcohol such as vodka). If you have the time and patience, it is a good idea to "run in" a new reed by wetting for a few minutes every day for three or four days before playing. If a reed has become warped due to drying out too quickly after playing it may need several minutes soaking, otherwise I prefer to just moisten with saliva.
It’s unlikely that all the reeds in a box will play well. You can improve the immediate playability of a reed sometimes. If the underside of the reed is not flat, take a piece of fine emery paper, lay it flat on a piece of glass and gently sand the bottom of the reedby moving the reed across the emery paper lengthwise. Alternatively scrapegently with a razor blade holding the blade almost at right angles across the whole width of the reed and use steady smooth strokes.
The exposed fibers of the reed on thecut part will be quite porous. It is a good idea to "polish" this area by rubbing along the grain with your thumb. Be careful not to damage the tip of the reed.
Checking again after you have played on it for a while
After a reed has been played on, the wetness can sometimes cause further slight distortion. Often this can be curedby simply tightening the ligature slightly, but it can also be worth resanding or scraping the bottom of the reed. However, this could be symptom of an uneven mouthpiece table causing water or spit to get under the reed.
Altering a reed’s strength
You can make a reed harder or softer yourself. To make it harder you can either clip the end off with a reed trimmer, or find a coin with the same curve, hold it against the end of the reed and burn off a little at a time. Trimming a reed may not be ideal as it changes the basic geometry of the reed - the heart becomes closer to the tip so you should not trim off more than about 1/32 of an inch (1.5 mm).

In this picture the slightly shaded area represents the thicker bit of reed you would see if you hold it up to the light. The heart is very important.
Imagine taking a bit off the tip, the heart therefore becomes closer to the tip so upsetting the possibly ideal contour as in this picture of a reed that has had too much trimmed, you can see there is very little shaved reed between the heart and tip:

There are other problems involved withusing a reed clipper to rejuvenate an old reed:
A reed clipper in this case is likely to have only a short term beneficial effect, but with the side effect of compromising the make up of the reed (i.e. the heart becoming closer to the tipas I said earlier). If this side effect is not as pronounced as the beneficial effect of "hardening" the reed, then you may have a few more minutes or even hours of use from the reed.

To make a reed softer use reed rush,fine sand paper or a very sharp blade to gradually remove material from the topof the reed. Gently sand or scrape the sides (of the top) towards the tip,don’t sand or scrape the middle or heart of the reed, which should always be bullet shaped as in the pictures above when you hold it to the light. Do not remove any material from the tip or near the tip.
Comparative reed strength
This chart compares the strength of various different makes of reed. 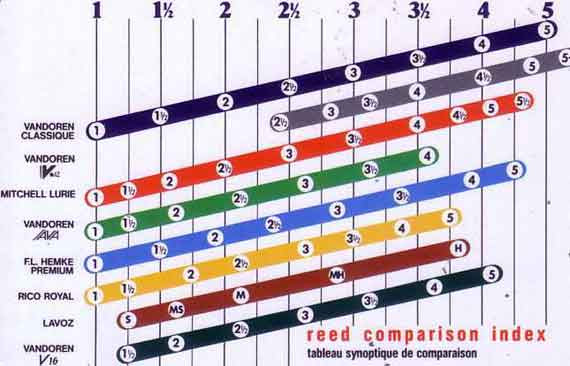 article from http://tamingthesaxophone.com/saxophone-reeds.html
Posted by Sara at 1:41 PM No comments:

Welcome to they new Saxtastic Saxophone blog. You may be wondering why I had to switch. When I created my site, I had a limited amount of memory. It turns out that I only have one gigabyte of memory left, so I had to find another site to host my blog. http://www.saxtasticsaxophone.webs.com will still be active, but this will be where the blog is from now on. Sorry for any inconvenience.